With the New Year comes hopes of an active 2021, we hope everyone is safe and healthy. 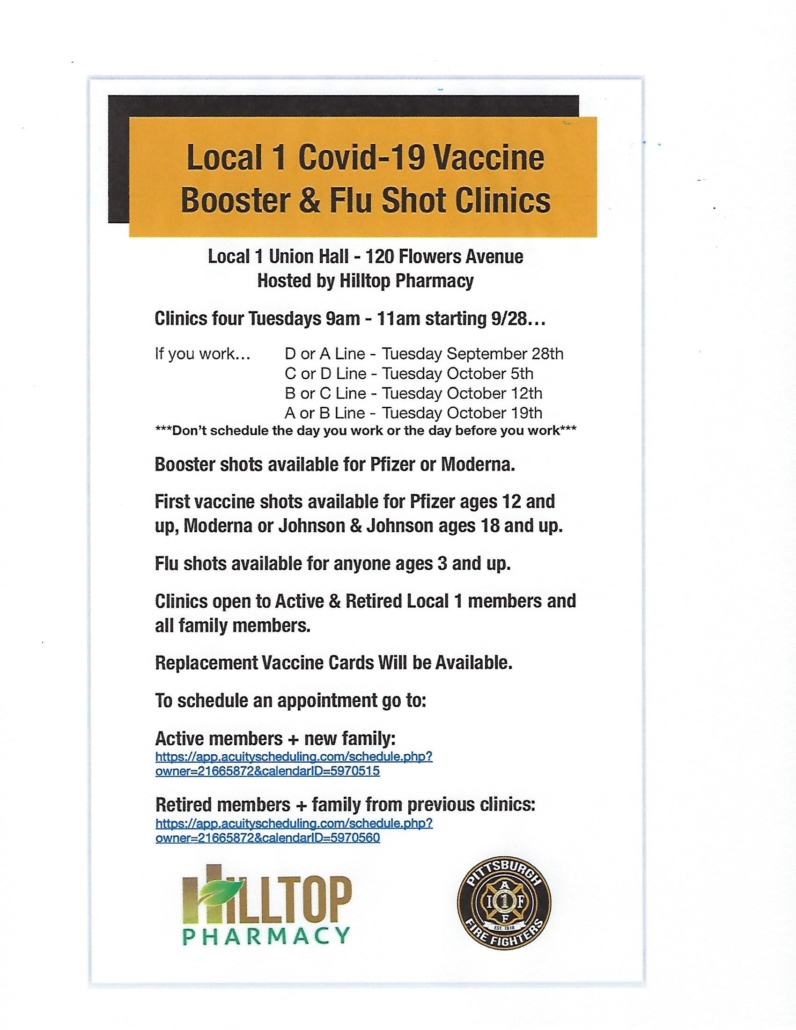 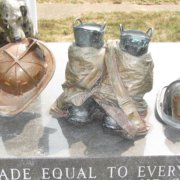 On October 3, 2021 the Pittsburgh Veteran Firefighters Association will sponsor their Annual Firefighters Memorial Service to honor those who are serving and have gone before us. The service will take place at the Voegtly Cemetary, 1955 Lowrie Street Pittsburgh, PA 15212, @ 11:00am. A luncheon @ 1:00pm will follow at Monte Cello’s Restaurant, 2198 Babcock Blvd., Ross Township.
All are welcome; active, retired, families, and friends to participate in our service and the luncheon.
“Lets Honor and Remember Together” 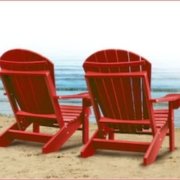 Retirements for the month of  July 2021

May you have many years of 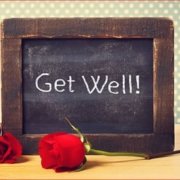 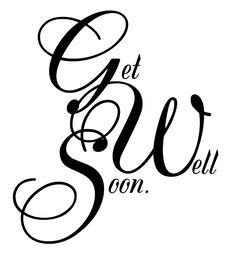 ith great sadness that we acknowledge the passing of; 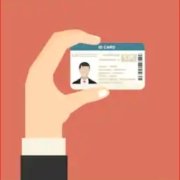 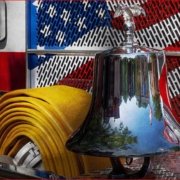 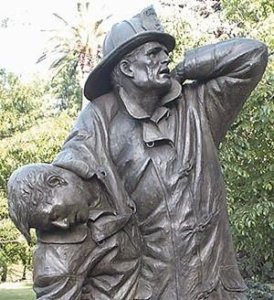 These were ordinary men and women in a profession that often took them to the edge of disaster. With years of training and practice they learn to overcome their fears, while gaining self-confidence in their abilities. They knew it was inevitable that someday they would come face to face with their own mortality. These Firefighters who work to preserve life and property, and whose shadowy figures would appear among the smoke and flames, struggled daily with the unknown challenges awaiting them. The people they served in the midst of destruction, never knew their names, never knew they had wept in silence for them, and never knew how the years of endless training had not prepared them for the realities of their profession. They were not heroes, just ordinary people doing an extraordinary job.
To these men and women, their only reward was in knowing that they gave their best—they are the Retired Firefighters—people of extraordinary courage—people who gave the very best of themselves to others. 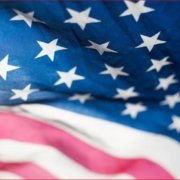 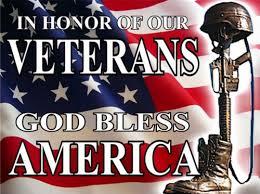 Lets never forget those who have fought and continue to fight and die for “Our Country” and the Freedoms we enjoy. 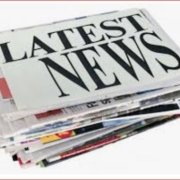 Lauren Wengler, [email protected], 724.935.2310, handles all questions about the benefits as well as eligibility changes.

This is a 2013 photo by Rich Waters. These men are all veterans of old No.16 on Penn Avenue. Can anyone name them?

That is what I would call a group of Super FF's right there!

Great pic!!! I really do miss the good old days! Great bunch of guys and firefighters right there!!

Talk about legends. These guys taught a Hell of a lot of young Firemen, how to become old Firemen.

Humbled to have been a small part of that brotherhood.

September 25, 1925 had been a slow day for Engine & Truck Company 29. The daylight crew had no runs and the night turn crew hoped for the same. But at 8:35 pm the stillness of the cool September evening was broken by an alarm from Box 6782 located at the intersection of Hermitage and Collier Streets.

Engine 29 drove west on Hamilton Avenue and turned right on Collier; this route would take them directly to the Box. Engine 16 was second due and they traveled from Penn Avenue turned left on N. Homewood Avenue, then turned right on Frankstown Avenue intending to turn left on Sterrett Street and follow it to Hermitage. Truck 29 was slow getting out of quarters and did not turn at Collier Street, they passed it and turned on Sterrett Street…

Flinn continued Truck 29 on its course straight across the intersection of Sterrett Street at Frankstown. Whether or not he saw Engine 16 or if he slowed down was not noted in witness statements or Coroner Inquest records.

William Lynch and Captain Rogan in the front seat of No.16 must have been completely stunned when suddenly 29 Truck rolled through the intersection directly in front of them. They did not expect the truck on Sterrett Street but in those few seconds they would have known they could not avoid a collision.

Lynch pressed his feet down on the brake and clutch pedal with all his strength but could not bring the apparatus to stop at the distance he was from them. Captain Rogan braced for the impact by turning in his seat and grabbing the handle used for mounting the apparatus. Lynch turned the wheel hard to the right to try to miss them. It did not work.

The collision was just behind the center of the truck and fortunately behind where James DeMaria was situated. Engine 16 hit 29 Truck with such force that the truck’s frame bent. The impact knocked the rear of the truck to its right throwing DeMaria off the sideboard with the forward momentum causing him to tumble along the street in the direction of travel.

The truck was hit beyond the center where there was less weight on the machine than in the front causing it to lift as it was propelled to the right.

John Affolter was ejected from his position on the right sideboard and, in the same way as DeMaria, the forward momentum carried him in the direction of travel along the cobblestones.

The rear of the truck was yawing to the right when it landed, and it was still going forward. James Flinn had lost control of the apparatus and, as it continued to move forward, the right rear wheel rolled up between Affolter’s legs. He was face down on the cobblestones with his right leg up on the curb when he was run over. The dual rear solid rubber tires crushed his right thigh where it met his hip, caught his midsection, yet completely missed his arm and shoulder.

The truck swerved left and then right throwing Hyde out of his seat then Flinn out of his. With the sudden release of the clutch and gas pedal the engine stalled, the truck jerked to a halt just beyond the intersection. The entire crew was lying injured in awkward positions on the street.

When 16 Engine turned sharply to the right before impacting the truck, the three men riding on the tailboard were first thrown off balance by the sudden braking and then the impact.

The inertia of the turning had pushed them toward their left. Fireman Frank McMahon was riding on the left side of the tailboard with John Scanlon and Gregg McMillan to his right. McMahon was pushed off the tailboard by the combined weight of his two buddies who were involuntarily forced into him.

Miraculously Captain Rogan and William Lynch were not ejected from No.16 when it hit the truck. Lynch hit the steering wheel with his chest and was stunned; Rogan was still clutching the handle on the outside of his seat. The machine was turned sideways, stopped in the middle of Frankstown Avenue. The front end was smashed, the engine stalled, and fluids were leaking on to the road. Captain Rogan collected himself and then dismounted the pumper.

John Scanlon and Gregg McMillan were talking to Frank McMahon who was still lying in the street. As Rogan walked toward them, they assisted McMahon in standing up and helped him off the street.

William Lynch was upset with himself that he’d crashed the pumper into 29’s truck. When he noticed a man on Sterrett Street lying face down with a pool of blood forming around his midsection he was sickened. James DeMaria was kneeling near him gently shaking his shoulders and calling, “John, John, wake up John!”

John Affolter was still lying prone, unconscious, with his right leg up on the curb at an odd angle. Blood was pooling beneath him. Acting Chief, Captain Johnston, arrived on the scene of the accident and was shocked at the spectacle of two wrecked fire apparatus, a man down on his left, and ahead of him someone was bleeding profusely.

Captain Rogan began explaining what had occurred to Johnston, but his explanation went unheard. A patrol wagon from No.6 Police Station responding to the alarm had made its way to the scene and Johnston waved them up to where Affolter lay. Flinn and Hyde had gathered themselves and stood with the police officers, Captain Rogan, and Lynch, around Affolter.

“Let’s get him turned over.” said Johnston. With that the men rolled Affolter over completely on to the street. Up near the blood soaked pocket of his trousers his thigh bone was protruding through a tear in the material. Blood poured from the wound. They took his belt off and wrapped it around his groin cinching it as tightly as they could. There was not much leg to work with, but the flow of blood slowed.

John Scanlon and Gregg McMillan helped Frank McMahon into the police wagon. Flinn, Hyde, Lynch, and the two police officers carried Affolter and placed him in the police wagon. They took the two injured men to the Pittsburgh Hospital, just under one mile away on Frankstown Avenue.

John W. Affolter was admitted and immediately prepared for surgery. He had suffered a compound fracture of the right femur with contusions and rupture of large blood vessels and muscles in his leg. A surgeon amputated the leg and was able to stop the bleeding. At 10:30 p.m. the surgery was complete and then, they waited.

Affolter’s wife had been notified of the accident and also arrived during the surgery. She prayed and waited. When Affolter was brought from the surgery, the medical staff allowed her to briefly see her unconscious fireman. Then she was politely asked to leave, with a promise she could return in the morning.

But she wouldn’t have to return. Four hours after the crash on the 26th of September, 1925, at 12:15 a.m., John W. Affolter died from his injuries. He had lost too much blood during the ordeal. The official cause of death was listed as “Shock and loss of blood.” Today it is called ‘hypovolemic shock.’ In 1925, intravenous therapy was still several years away, and doctors had no way of replenishing lost fluids or blood. Affolter passed quietly into the next world.

John Affolter was 53 years old. His first wife had preceded him in death. His second wife, Kathryn and her two sons, which he had helped raise, survived him.

Rest In Peace John Affolter, after 96 years you are not forgotten, and Brother, your sacrifice will never be forgotten.
The alarm was a malicious false apparently set by some boys from the neighborhood. ... See MoreSee Less

Is That Don Allen From Engine #3 in Rear🇺🇸

Prayers on the way!

This morning my uncle, John Anobile, passed away. He lived in Spain so there is no service. If there's going to be some sort of memorial I will keep you informed. ... See MoreSee Less

Sorry for your loss

Sorry for your loss 🛐 I remember John

Sorry for your loss my friend.

Our thoughts are with you and your family

Omg , we just talked two weeks ago 😔. We came on the job together . Ahhhhhhhh man

Condolences😢 Worked with him at 8, had no clue he was your uncle.

Sorry for your loss, I worked with John at #8.

I met John at No.8 He adhered to the Highest Tradition of the Brotherhood. My Deepest Sympathies. He will be sorely missed.

Oh, no. So sorry for your loss.

So sorry to hear that I came on with him Good guy. RIP

So sorry Ralph, John was a great guy.

Sorry for your loss Ralph.

So sorry Ralph. Worked with him a few times.

Very sorry to hear this news Ralph. John spent some time at No.6 before he retired, he was a nice guy.

Sorry for your loss

Very sorry for you loss....